Is ReRAM the end of NAND flash? 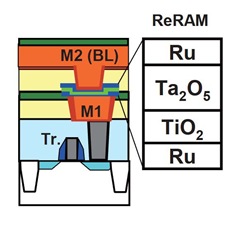 NAND flash stores data in a little cloud of electrons in a quantum well. The presence or absence of charge - or the strength of the charge - tells us what bits are stored.

ReRAM stores data through changes in the resistance of a cell. There are a variety of ReRAM technologies in development, including phase-change memory (PCM) and HP's memristors, based on at least a half-dozen competing materials.

Expect healthy competition as the industry and buyers sort out the details.

While different implementations have different specs, all ReRAM has key advantages over today's common NAND flash.

NAND flash will retain advantages in cost and density for the foreseeable future, meaning that it will be here for decades to come. So where will ReRAM fit in the storage hierarchy?

Toshiba is well-positioned to enter these high-end markets with SSDs analogous to today's 15k disks. It may not be a huge market, but the margins will make it worthwhile.

Other vendors, including Panasonic, Micron and Samsung, are also working on ReRAM products. Another interesting question: to what extent will fast ReRAM replace DRAM in systems?