We have learned and use the decimal numbering system simply because humans are born with ten fingers! Hence, the numeric system we is the decimal number system, but this system is not convenient for machines since the information is handled codified in the shape of ON or OFF bits.

This means, we have to learn the binary system in addition to the decimal system. We also will discuss the octal and hexadecimal systems because conversion to/from binary is easy and numbers in these systems are easier to read than binary numbers for humans.

This way of codifying takes us to the necessity of knowing the positional methods of calculation which will allow us to express a number in any base where we need it.

A base of a number system or radix defines the range of values that a digit may have.

Binary Number System
In the binary system or base 2, there can be only two values for each digit of a number, either a "0" or a "1".
Digital and computer technology is based on the binary number system, since the foundation is based on a transistor, which only has two states: on or off.

Each digit of the number is called a bit or which is a short for binary digits.

Each bit must be less than 2 which means it has to be either 0 or 1.

Note: The general term for decimal point is radix point

Octal number systems are used by humans as a representation of long strings of bits since they are:

Decimal number system is default and easy to use for us. For example when you see a number 56 your assumption is that its base or radix is 10 i.e. “56 base 10”.

1. Convert from Decimal to Any Base
Let’s think about what you do to obtain each digit. As an example, let's start with a decimal number 1234 and convert it to decimal notation. To extract the last digit, you move the decimal point left by one digit, which means that you divide the given number by its base 10.

The remainder of 4 is the last digit. To extract the next last digit, you again move the decimal point left by one digit and see what drops out.

The remainder of 3 is the next last digit. You repeat this process until there is nothing left. Then you stop. In summary, you do the following:

Conversion of decimal number to binary
Now, let's try a nontrivial example. Let's express a decimal number 1341 in binary notation.
Note that the desired base is 2, so we repeatedly divide the given decimal number by 2.

The easiest way to convert fixed point numbers to any base is to convert each part separately. We begin by separating the number into its integer and fractional part. The integer part is converted using the remainder method, by using a successive division of the number by the base until a zero is obtained. At each division, the reminder is kept and then the new number in the base r is obtained by reading the remainder from the lat remainder upwards.

The conversion of the fractional part can be obtained by successively multiplying the fraction with the base. If we iterate this process on the remaining fraction, then we will obtain successive significant digit. This methods form the basis of the multiplication methods of converting fractions between bases. 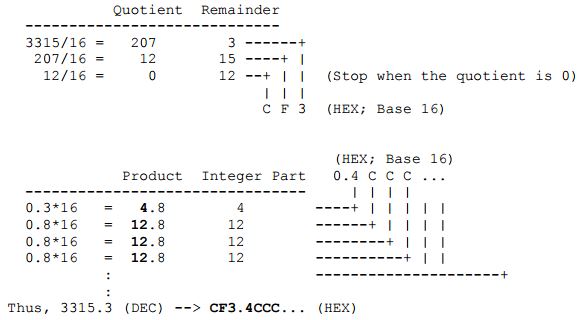 Likewise, the least significant digit in a hexadecimal number has a value of

In summary, the conversion from any base to base 10 can be obtained from the formulae

Where b is the base, di the digit at position i, m the number of digit after the decimal point, n the number of digits of the integer part and X10 is the obtained number in decimal. This form the basic of the polynomial method of converting numbers from any base to decimal

Example: Convert 234.14 expressed in an octal notation to decimal.

Example:  Convert 234.14 expressed in an octal notation to decimal.