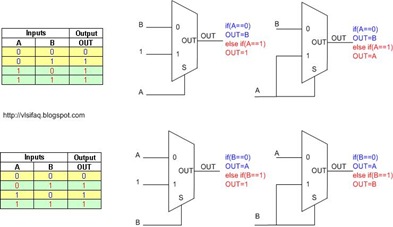 Applying similar concept of AND gate using 2:1 MULTIPLEXER, make either of input A or B as select line of MUX, connect other input to 0th input line. 1st input of the MUX is always tied to logic 1. 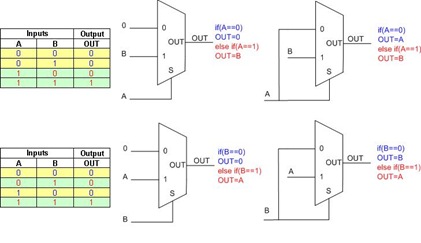 Similar concept can be applied to create all basic gates from 2:1 MUX. I will publish all these in coming blog posts along with the elaborated 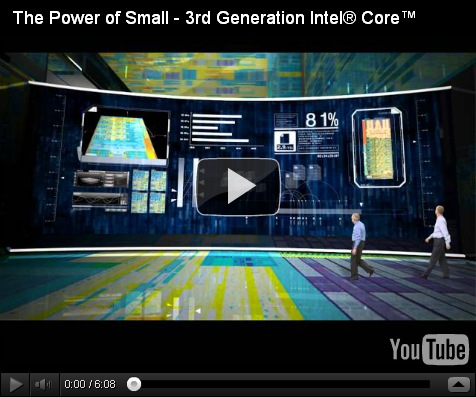 The combination of Intel’s cutting-edge 3-D tri-gate transistor technology and architectural enhancements help make possible up to double the 3-D graphics and HD media processing performance compared with Intel’s previous generation of chips. As a result of the stunning, built-in visual performance, all the things people love to do on their PCs — from creating and editing videos and photos, surfing the Web, watching HD movies or playing mainstream games — are quicker, crisper and more life-like. With as much as 20 percent microprocessor performance improvements and new technologies to speed the flow of data to and from the chips, the new processors further extend Intel’s overall performance leadership.

In the coming months, additional versions of the 3rd generation Intel Core processors will be available to power a new wave of systems ranging from Ultrabook™ devices, to servers and intelligent systems in retail, healthcare and other industries.

"The 3rd generation Intel Core processors were created from the ground up to generate exciting new experiences," said Kirk Skaugen, Intel vice president and general manager of the PC Client Group. "Our engineers have exceeded our expectations by doubling the performance of media and graphics versus the best processors we’ve built until today, which means incredible new visual experiences are here for new all-in-one PCs and upcoming Ultrabook devices. What makes all this possible is the combination of Intel’s leading manufacturing and processor architecture, and our unwavering commitment to drive computing innovations forward."

“Tick-Plus” – The Intel Advantage
The performance gains found in the new processors are due in part to the groundbreaking, three-dimensional structure of the new Intel transistors. Until today, computers, servers and other devices have used only two-dimensional planar transistors. Adding a third dimension to transistors allows Intel to increase transistor density and put more capabilities into every square millimeter of these new processors. Intel has once again re-invented the transistor and delivered an unprecedented combination of performance and energy efficiency, thus sustaining the pace of technology advancement and fueling Moore’s Law for years to come.

Intel engineers also reworked the graphics architecture of the 3rd generation Intel Core processors, helping to deliver dramatic improvements in the overall visual experience. Changing the chips’ architecture while at the same time shrinking the size of the underlying transistors is an acceleration of Intel’s “tick-tock” model. Previously, the company adhered to a strict “tick-tock” model in which a new manufacturing process was introduced in 1 year (the “tick”), and the architecture of the chip (the “tock”) was altered the next. The ability to accelerate the roadmap and change both the chips’ architecture and the manufacturing process at the same time was made possible because Intel is one of the few companies that both designs and manufactures its chips, a method called Integrated Device Manufacturing.

Great visual experience is about more than just gaming. Online video continues to grow dramatically, and is expected to comprise half of all Internet traffic this year.** The key to making video fun is the ability to quickly convert it for online sharing with friends and family. With Intel® Quick Sync Video 2.0 technology built into the new processors, people can convert their videos up to two times faster than even last year’s processors and up to 23 times faster than PCs just three years old.

Experiences, Secured. Platform, Enhanced.
The 3rd generation Intel Core processor also adds security features, including Intel® Secure Key and Intel® OS Guard to safeguard personal data and identity. Intel Secure Key consists of a digital random number generator that creates truly random numbers to strengthen encryption algorithms. Intel OS Guard helps defend against privilege escalation attacks where a hacker remotely takes over another person's system. These two features join existing platform security features such as Intel® Identity Protection Technology (Intel® IPT) and Intel® Anti-Theft technology (Intel® AT) to help make Intel platforms some of the most secure in the industry. When paired with the Intel® Series 7 Chipset, the new processors with Intel IPT can make a portion of the screen unreadable to spyware with the “protected transaction display” feature, helping prevent a hacker from obtaining login credentials that could lead to identity theft.

Processor and System Availability
Systems based on quad-core 3rd generation Intel Core processor products will be available beginning this month from leading system makers. Boxed versions of these processors will also be available this month from online, retail and channel resellers. Additional versions of the 3rd generation Intel Core processor products for servers, intelligent systems in retail, healthcare and other industries, Ultrabook devices and laptops and more will be available later this year.

Just published is the press release and tip-sheet on the 2012 VLSI Symposia on VLSI Technology and Circuits, this year in Hawaii. Listed first in the VLSI Technology highlight papers is Intel’s paper, “A 22nm High-Performance and Low-Power CMOS Technology Featuring Fully Depleted Tri-Gate Transistors, Self-Aligned Contacts and High-Density MIM Capacitors”, to be presented by Chris Auth in slot T15-2.

There was a fair bit of frustration at last year’s IEDM that there was no Intel paper on their tri-gate technology, although they had several others at the conference. The Intel folks I talked to said that there was reluctance to publish, since the other leading-edge semiconductor companies were not presenting – conferences were no longer the exchange of information that they have been in the past. I have to say I agree, some companies are keeping their technological cards very close to their corporate chests these days!

Also, no product was in the public domain at that point, though Intel claimed to be in production. By the time VLSI comes around in June, we should all be able to get Ivy Bridge based Ultrabooks, and we at Chipworks will have pulled a few chips apart.

In the paper the process is claimed to have “feature sizes as small as eight nm, third-generation high-k/metal gate stack technology, and the latest strained-silicon techniques. It achieves the highest drive currents yet reported for NMOS and PMOS devices in volume manufacturing for given off-currents and voltage. To demonstrate the technology’s versatility and performance, Intel researchers used it to build a 380-Mb SRAM memory using three different cell designs: a high-density 0.092- µm2 cell, a low-voltage 0.108- µm2 cell, and a high-performance 0.130-µm2 cell. The SRAM operated at 4.6 GHz at 1 V.”

The tip-sheet also posted the first Intel tri-gate images that I’ve seen in a while:

Here we are looking at sections parallel to the gate, across the fin. There is no scale bar, so fin width is an unknown; and the taper on the fin is a bit of a surprise. The top of the fin is rounded, likely to avoid reliability problems from electric field concentration at corners.

In the gate metal, there seems to be a layer of titanium nitride (TiN) above the thin dark line that is the high-k, so we can surmise that the PMOS work-function metal is TiN, as in previous generations. The gate fill itself is very black, so that appears to have been changed from the Al/Ti fill used before; possibly to tungsten or some other heavier metal.

The source/drain image confirms the use of epi, and the darker area is again likely SiGe, both for strain and resistance improvement. At the moment it’s hard to say if the taper is a function of manufacturing convenience (easier to etch?), or if there are some device physics advantages that improve transistor operation. We’ll see in June!

Xilinx, Inc. underscored its commitment to the emerging, high-growth market and its growing employee base in India with the inauguration of a new, expanded Xilinx India site in Hi-Tech city. The 131,000 square-foot office building is more than double the size of the previous site to accommodate engineering labs and collaboration space for end-to-end product development, a larger, energy-efficient data center, and expanded facilities for customer and employee events.

The Xilinx India site, which represents the largest R&D centre outside of the company's U.S. headquarters, is a critical contributor to Xilinx's success as the world's leading provider of 'all programmable' technologies and devices. This includes its newest, industry leading portfolio of 28nm 7 series and Zynq(TM)-7000 Extensible Processing Platform (EPP) families, which enable breakthroughs in price/performance/watt and programmable systems integration.

Currently, more than 400 employees in Hyderabad report into Xilinx's Programmable Platforms Development (PPD) and Worldwide Technical Support groups, which are global organizations responsible for development and delivery of the company's flagship programmable platforms and support of local, regional and multi-national customers in India. The expansion and increasing role of the Xilinx India engineering team is well aligned to the National Policy on Electronics goals to transform India into a global R&D hub.

"We're proud to commemorate the opening of our new Hyderabad site today and to celebrate the incredible contributions of our employees in India," said Gavrielov at today's inauguration ceremonies. "The Xilinx India engineering team will continue to play a pivotal role in our success as part of Xilinx's world-class PPD engineering organization. Notably, more than half the Zynq engineering team is based in India, with some aspects entirely designed and verified in India. The India team has sole ownership and development responsibility for significant aspects of our next-generationtool suite accelerating programmable design productivity."