“Developers of next-generation protocols need to leverage the latest test equipment that integrates the latest technologies,” said Michael Romm, vice president of product development, at LeCroy Protocol Solutions Group, a leading manufacturer of test and measurement equipment. “Altera’s latest family of 28-nm FPGAs gives us the capability to build the most sophisticated and advanced test equipment so our customers can rapidly develop and bring to market their next-generation systems.”

Published by Altera, click here to read the whole article. 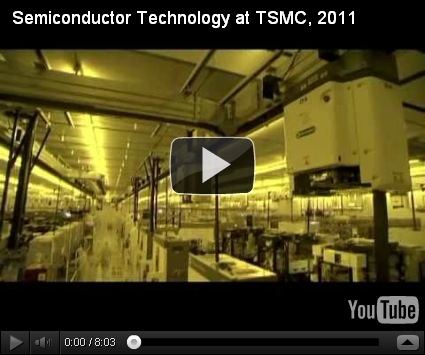 With blocking assignments each statement in the same time frame is executed in sequential order within their blocks. If there is a time delay in one line then the next statement will not be executed until this delay is over.

Non-Blocking assignments tackle the procedure of assigning values to variables in a totally different way. Instead of executing each statement as they are found, the right-hand side variables of all non-blocking statements are read and stored in temporary memory locations. When they have all been read, the left-hand side variables will be determined. They are non-blocking because they allow the execution of other events to occur in the block even if there are time delays set.

Note that d is set before c. This is because the four statements for setting a-d are performed at the same time. Variable d is not waiting for variable c to complete its task. This is similar to a Parallel Block.

We have already seen that non-blocking assignments can be used to enable variables to be set anywhere in time without worrying what the previous statements are going to do.

Another important use of the non-blocking assignment is to prevent race conditions. If the programmer wishes two variables to swap their values and blocking operators are used, the output is not what is expected:

This will give both x and y the same value. If the circuit was to be built a race condition has been entered which is unstable. The compliler will give a stable output, however this is not the output expected. The simulator assigns x the value of 3 and then y is then assigned x. As x is now 3, y will not change its value. If the non-blocking operator is used instead:

Another example when the non-blocking operator has to be used is when a variable is being set to a new value which involves its old value. 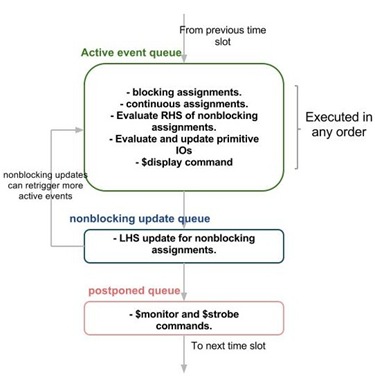 Many modern integrated circuits are sequenced based on globally distributed periodic timing signals called clocks. This method of sequencing, synchronous, is prevalent and has contributed to the remarkable advancements in the semiconductor industry in form of chip density and speed in the last decades. For the trend to continue as proposed in Moore’s law, the number of transistors on a chip doubles about every two years, there are increasing requirements for enormous circuit complexity and transistor down scaling.

As the industry pursues these factors, many problems associated with switching delay, complexity management and clock distribution have placed limitation on the performance of synchronous system with an acceptable level of reliability. Consequently, the synchronous system design is challenged on foreseeable progress in device technology.

These concerns and other factors have caused resurgence in interest in the design of asynchronous or self-timed circuits that achieve sequencing without global clocks. Instead, synchronization among circuit elements is achieved through local handshakes based on generation and detection of request and acknowledgement signals.

Some notable advantages of asynchronous circuits over their synchronous counterparts are presented below:

* The asynchronous circuits consume less power than synchronous since signal transitions occur only in areas involved in current computation.

Despite the present unpopularity of the asynchronous circuits in the mainstream commercial chip production and some problems noted above, asynchronous design is an important research area. It promises at least with the combination of synchronous circuits to drive the next generation chip architecture that would achieve highly dependable, ultrahigh-performance computing in the 21st century.

The design of asynchronous circuit begins with some assumption about gate and wire delay. It is very important that the chip designer examines and validates the assumption for the device technology, the fabrication process, and the operating environment that may impact on the system’s delay distribution throughout its lifetime. Based on this delay assumption, many theoretical models of asynchronous circuits have been identified.

There is the delay-insensitive model in which the correct operation of a circuit is independent of the delays in gates and in the wires connecting the gate, assuming that the delays are finite and positive. The speed-independent model developed by D.E. Muller assumes that gate delays are finite but unbounded, while there is no delay in wires. Another is the Huffman model, which assumes that the gate and wire delays are bounded and the upper bound is known.

For many practical circuit designs, these models are limited. For the examples in this discussion, quasi delay insensitive (QDI), which is a combination of the delay insensitive assumption and isochronic-fork assumption, is used. The latter is an assumption that the relative delay between two wires is less than the delay through a sequence of gates. It assumes that gates have arbitrary delay, and only makes relative timing assumptions on the propagation delay of some signals that fan-out to multiple gates.

Over the years, researchers have developed a method for the synthesis of asynchronous circuits whose correct functioning do not depend on the delays of gates and which permitted multiple concurrent switching signals. The VLSI computations are modeled using Communicating Hardware Processes (CHP) programs that describe their behavior algorithmically. The QDI circuits are synthesized from these programs using semantics-preserving transformations.

In conclusion, as the trend continues to build highly dependable, ultrahigh-performance computing in the 21st century, the asynchronous design promises to play a dominant role. 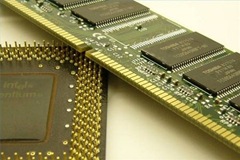