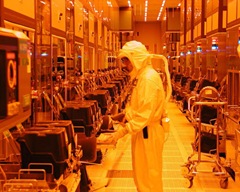 BANGALORE, India—A decision on the long-pending proposal to set up a domestic wafer fab in India is likely to be made by the end of March, semiconductor industry executives said.
India has been debating building a wafer fab for years. A decision on whether to move forward with a plan to build a fab here had been promised by the end of 2012. But that deadline came and went with no decision made.

Still, semiconductor industry executives here said they are now far more confident that a decision on the plan by India's national government is imminent. Their optimism is based on some policies conducive to domestic electronics manufacturing being adopted last year, with still others in the works.

"Electronics manufacturing is being looked at more progressively," a representative of the India Semiconductor Association (ISA) said here Tuesday (Jan. 22).

A study conducted by the ISA and market researcher Frost & Sullivan on this market projected a compound annual growth rate of nearly 10 percent for India's electronics, system design and manufacturing market from 2011 through 2015. The market is expected to grow to $94.2 billion in 2015 from $66.6 billion in 2011, according to the study.

"This is a fantastic growth rate and should show the way to product development and value-added manufacturing domestically, rather than relying on imports and low value-added screwdriver assembly," the ISA said.

Fears loom over the import bill for electronic products though, with 65 percent of India's demand currently being met by imports.

India’s semiconductor market revenue was an estimated $6.54 billion in 2012. The country's semiconductor design industry is expected to grow at a 17 percent CAGR, amounting to over $10 billion in 2012. Of this, VLSI design accounted for $1.33 billion, embedded software for $8.58 billion and board/hardware design for $672 million.