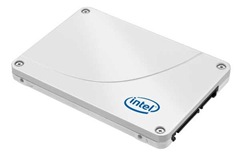 Intel has revved up its mainstream SSD line from the Series 330 to the Series 335, and the company sent over a 240GB model for evaluation (and 240GB is apparently the only capacity it is launching this series with). The new drives feature 20nm NAND flash memory, compared with the 25nm chips in the older series, but Intel continues to use an LSI/SandForce SF-2281 controller with custom Intel firmware. The company uses the same controller in its Series 330 and Series 520 drives.

But what may be of most interest to consumers is that the Series 335 is significantly cheaper per gigabyte: Intel expects this 240GB drive to cost about the same as a 180GB Series 330. And while the product was officially embargoed until 8:30 a.m. on October 29, we saw it listed for sale online the evening of October 28 at prices between $184 and $225, including shipping.

Like its most recent predecessors, the Series 335 is outfitted with a SATA revision 3.0 (6gbits/s) interface, and the drive comes housed inside a 2.5-inch enclosure that is 9.5mm thick. That thick profile renders it unsuitable for many current ultraportables; however, the stout of heart can easily remove the board from its enclosure and fit it inside a thinner case or install it directly into a vacant drive bay (although doing either will likely void Intel’s three-year warranty).

Here are some results of 10GB copy and read tests. Keeping in mind that our current test bed uses a 7200-rpm hard drive to feed and read data from our test subjects, the 335 performed very well. It wrote our 10GB mix of files and folders at 93.2MBps and read them at 57.9MBps; and it wrote our single 10GB file at 124.1MBps while reading it at 129.8MBps.