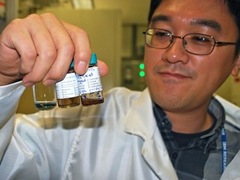 IBM has put the chip industry on notice by inventing a new technology that would replace silicon with a new material, carbon nanotubes.

IBM has found a new way to put what seems like an impossibly large number of transistors into an insanely small area, the width of only a few atoms. That's 10,000 times thinner than a strand of human hair and less than half the size of the leading silicon technology.

Or as IBM explains:

Carbon nanotubes are single atomic sheets of carbon rolled up into a tube. The carbon nanotube forms the core of a transistor device that will work in a fashion similar to the current silicon transistor, but will be better performing. They could be used to replace the transistors in chips that power our data-crunching servers, high performing computers and ultra fast smart phones.

Inventing the tech is one thing, being able to manufacture it at scale is another. And that's the real breakthrough IBM announced. It has put more than 10,000 of these "nano-sized tubes of carbon" onto single chip using a standard fabricating method.

It will still be years, maybe even a decade, before carbon nanotubes would really replace silicon-based chips in our servers and our smartphones. But this breakthrough is important because the chip industry is reaching a point where it physically can't squeeze much more processing power onto existing forms of chips.  Some have predicted that we'll soon reach an end to Moore's Law which tries to double the density of chips on a wafer every two years. 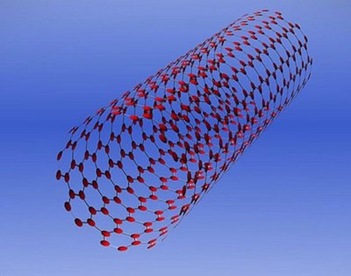 This is what a nanotube looks like under a microscope.

Earlier this year Intel dumped $4.1 billion into two new techniques to help the chip industry continue to get more powerful at smaller scales. These two new technologies are not the same as what IBM is working on.