SSDs have come a long way since Intel released its first, the X25-M, a little more than four years ago. That drive was a revelation, but it wasn't universally faster than the mechanical hard drives of the era. The X25-M was also horrendously expensive; it cost nearly $600 yet offered just 80GB of capacity, which works out to about $7.50 per gigabyte.

My, how things have changed. 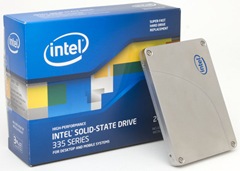 Solid-state drives gotten a lot faster in the last few years. They're already pushing up against the throughput ceiling of the 6Gbps Serial ATA interface, leaving mechanical hard drives in the dust. I can't remember the last time we saw an HDD score better than an SSD in one of our performance tests.

More importantly, SSDs have become a lot more affordable. Today, you can get 80GB by spending $100. The sweet spot in the market is the 240-256GB range, where SSDs can be had for around $200—less than a dollar per gigabyte. Rabid competition between drive makers deserves some credit for falling prices, particularly in recent years. Moore's Law is the real driving factor behind the trend, though. The X25-M's NAND chips were built using a 50-nm process, while the new Intel 335 Series uses flash fabricated on a much smaller 20-nm process.

Designed for enthusiasts and DIY system builders, the 335 Series is aimed squarely at the sweet spot in the market with a 240GB model priced at $184. That's just 77 cents per gig, a tenfold reduction in cost in just four years. The price is right, but what about the performance? We've run Intel's latest through our usual gauntlet of tests to see how it stacks up against the most popular SSDs around.

Die shrinkin'
Intel and Micron have been jointly manufacturing flash memory since 2006 under the name IM Flash Technologies. The pair started with 72-nm NAND flash before moving on to the 50-nm chips used in the X25-M. The next fabrication node was 34 nm, which produced the chips used in the second-generation X25-M and the Intel 510 Series. 25-nm NAND found its way into the third-gen X25-M, otherwise known as the 320 Series, in addition to the 330 and 520 Series. Now, the Intel 335 Series has become the first SSD to use IMFT's 20-nm MLC NAND.

Building NAND on finer fabrication nodes allows more transistors to be squeezed into the same unit area. In addition to accommodating more dies per wafer, this shrinkage can allow more capacity per die. The 34-nm NAND used in the Intel 510 Series offered 4GB per die, with each die measuring 172 mm². When IMFT moved to 25-nm production for the 320 Series, the per-die capacity doubled to 8GB, while the die size shrunk slightly to 167 mm². 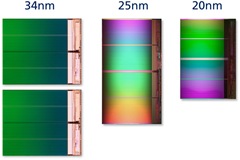 The Intel 335 Series' 20-nm NAND crams 8GB onto a die measuring just 118 mm². That's not the doubling of bit density we enjoyed in the last transition, but it still amounts to a 29% reduction in die size for the same capacity. Based on how those dies fit onto each wafer, Intel says 20-nm production increases the "gigabyte capacity" of its flash fabs by approximately 50%. IMFT has been mass-producing these chips since December of last year.

As NAND processes shrink, the individual cells holding 1s and 0s get closer together. Closer proximity can increase the interference between the cells, which can degrade both the performance and the endurance of the NAND. Intel's solution to this problem is a planar cell structure with a floating, high-k/metal gate stack. This advanced cell design is purportedly the first of its kind in the flash industry, and Intel claims it delivers performance and reliability comparable to IMFT's 25-nm NAND. Indeed, Intel's performance and endurance specifications for the 335 Series 240GB exactly match those of its 25-nm sibling in the 330 Series.

Intel says the 335 Series 240GB can push sequential read and write speeds of 500 and 450MB/s, respectively. 4KB random read/write IOps are pegged at 42,000/52,000. Thanks to the lower power consumption of its 20-nm flash, the new drive should be able to hit those targets while consuming less power than its predecessor. The 335 Series is rated for power consumption of 275 mW at idle and 350 mW when active, less than half the 600/850 mW ratings of its 25-nm counterpart.

On the endurance front, Intel's new hotness can supposedly withstand 20GB of writes per day for three years, just like the 330 Series. As one might expect, the drive is covered by a three-year warranty. Intel reserves its five-year SSD warranties for the 320 and 520 Series, whose high-endurance NAND is cherry-picked off the standard 25-nm production line. I suspect it will take Intel some time to bin enough higher-grade, 20-nm NAND to fuel upgrades to those other models.

Our performance results will illustrate how the 335 Series compares up to those other Intel SSDs. Expect the 320 Series to be much slower due to its 3Gbps Serial ATA interface. That drive's Intel flash controller can trace its roots back to the original X25-M, so the design is a little long in the tooth. The 520 Series, however, has a 6Gbps interface and higher performance specifications than the 335 Series. The two are based on the same SandForce controller silicon, though.