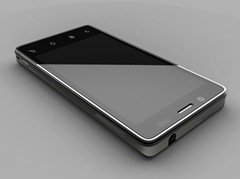 Intel is coming to mobile phones! Really! The chipmaker is gearing up to show off its Medfield processors at CES this year, which would be exciting if I hadn't heard this same tale way too many times before.

Intel is the company that cries wolf in mobile. Back in 2006, Intel made the mistake of ditching its Xscale line, the processors used in many early smartphones and successful PDAs. Under the questionable guidance of Marvell, Xscale then went from a dominant mobile brand to just one among many chip lines out there.

That left Intel with absolutely zero access to mobile devices. Ever since then, the company's been trying to get back into the game. But rather than enhance industry-standard ARM designs, Intel's been trying to sell everyone on x86-based chips.

Intel appears one step closer to finally breaking into the mobile arena after making their reference tablet and smartphone designs accessible to MITs Technology Review. Both devices are based around Intel’s Medfield iteration of their Atom processor, a chip based on the 32nm manufacturing process and promising better battery life than previous mobile CPUs from the silicon maker.

The Medfield-based reference smartphone was reportedly up to snuff with other currently available handset designs, boasting “Blu-ray0quality” video and the ability to shoot burst photos at 15 frames per second. The handset made available was running Android 2.3, but the tablet featured Android 4.0. Google and Intel have talked about working more closely with the development of the latest version of Android, and it could pay off as the reference tablet was said to be both as thing and as lightweight as the iPad 2 while outperforming the current generation of Android 3.0 slates.

Intel still has some work to do in integrating 3G and 4G components into the Medfield design, but the company looks to make a push over the next year or two to establish itself as a leader in the mobile market. Companies such as Qualcomm and NVIDIA currently have a leg up, but if Intel’s design proves as powerful as initial reports the battle could be starting to heat up.

Nobody's listened so far. Here are some highlights of Intel's failed push into mobile:

June 2006: Intel sells off Xscale, which had won a 2004 PCMag Technical Excellence award for heralding a new era of multimedia smartphones. Xscale was used in successful products like HP's iPAQs, Motorola's Q series, the Dell Axim and the Palm Treo. According to The Register, Intel wanted to push x86-based chips into smartphones rather than sticking with ARM designs.

September 2007: At that year's Intel Developer Forum, Intel says it has two new chips designed for devices with 4-inch screens. Menlow and Moorestown make it into exactly zero popular handheld devices over the next few years.

March 2008: Intel introduces the Atom processor, saying it will power "MIDs," or handheld, mobile Internet devices. Over the next year many companies introduce MIDs, but nobody buys any of them. Rather than being a power-guzzling mobile chipset, the Atom finds success in the netbook realm as a slow but power-efficient laptop chipset.

February 2009: Intel brings a "MID bar" to Mobile World Congress. In Hebrew, "midbar" means "wilderness," as in "forty years wandering in the." Intel also announces an alliance with LG to produce more MIDs nobody wants.

January 2010: Intel says the second-generation Atom, called Moorestown, will be a real mobile chipset. Intel introduces the first phone based on the Atom Moorestown processor, the LG GW990. It is about the size and shape of a brick. It never appears in any large market. However, Intel keeps talking up Moorestown throughout 2010.

February 2010: Intel joins with Nokia to promote MeeGo, a new Linux-based OS that's the merger of Intel's Moblin and Nokia's Maemo. MeeGo is a stunning failure; Intel abandoned the project in September 2011.

February 2011: MeeGo and Moorestown don't impress the market. Let's try again! Intel says its "Medfield" system-on-a-chip designs will come in 2012. Not much comes of Intel's mobile strategy in 2011 as the company gears up for Medfield, which will be shown at CES 2012.

March 2011: The head of Intel's ultra-mobile division leaves the company.

December 2011: Intel restructures its mobile division in an attempt to gain some traction.

There are a few new factors which might improve Intel's chances this time around. Back in September, Google said it would optimize Android for the next generation of Intel processors. That gives Intel a better OS than the proprietary Moblin/MeeGo nonsense it was working with before.

Windows 8 is also on the horizon, and while Windows 8 will work on ARM processors - a major threat to Intel - it means there will be a major tablet-oriented OS where the vast majority of legacy apps will be Intel-optimized. That could sway tablet developers to work with Intel chips.

In the phone world, though, the massive ecosystem around ARM means that Intel's sales pitch will have to be very compelling. The mobile-phone chip world is much more competitive than the desktop world Intel is used to. Within the ARM ecosystem alone, TI, Qualcomm, Nvidia, ST-Ericsson, Rockchip and others are constantly fighting for dominance. And mobile phone makers who want to try new architectures can also turn to MIPS or Power.

Intel has for years coasted on its critical mass in the PC industry. Even Apple came over to Intel after many years because of its low cost and economies of scale. But Intel doesn't have that advantage over companies like TI and Qualcomm in mobile.

It's not just about matching ARM-based designs on speed and power consumption, either. Intel will have to provide significantly better performance or lower power consumption to pull manufacturers away from the default, ARM world. Intel says it can do that by using a 32-nanometer process to produce its new system-on-a-chip. That's a solid argument, but Intel has made this argument too many times before. ARM vendors aren't far behind, either; both TI and Qualcomm have chips coming next year based on an even more efficient 28nm process.

We have to remember Michael Gartenberg's First Law. (Okay, maybe it's his second or third; not so sure of the numbering.) The dean of mobile tech analysts once told me, "never underestimate anyone very rich and very patient." That goes for Microsoft, and it goes for Intel as well.