The Brainy CPU - Mimicking the brain, in silicon

What would you say if your smart device started self-learning different languages and became your smart personal translator? What if it had completed a study of quantum mechanics and became your virtual tutor (my wishful thinking to pass a Christmas exam)… :) 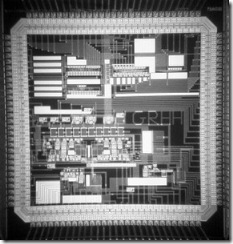 MIT researchers have taken this major step by designing a computer chip that mimics how the brain?s neurons perceive new information. This phenomenon is known as ?neuroplasticity? and is an ability of the brain related to learning and memory.

There are about 100 billion neurons in the brain, each of which forms synapses with many other neurons. A synapse is the gap between two neurons (known as the presynaptic and postsynaptic neurons). The presynaptic neuron releases neurotransmitters, such as glutamate and GABA, which bind to receptors on the postsynaptic cell membrane, activating ion channels. Opening and closing those channels changes the cell's electrical potential. If the potential changes dramatically enough, the cell fires an electrical impulse called an action potential.

All of this synaptic activity depends on the ion channels, which control the flow of charged atoms such as sodium, potassium and calcium. Those channels are also key to two processes known as long-term potentiation (LTP) and long-term depression (LTD), which strengthen and weaken synapses, respectively.

A silicon chip can simulate the activity of a single brain synapse - a connection between the presynaptic and postsynaptic neurons relaying information flow - with 400 transistors.

How does the chip work?

In the chip, the transistors could mimic activities of different ion channels. Unlike conventional chips operating in on/off mode (digital), current through the transistors on this new brain chip will flow in analog fashion, driven by a gradient of electrical potential in the same manner of ions flowing through ion channels in a cell. Chi-Sang Poon, a principal research scientist in the Harvard-MIT Division of Health Sciences and Technology, mentioned that it is possible to capture every ionic process going on in a neuron by tweaking the parameters of the circuit to match specific ion channels.

There are quite a number of future applications using this brainy chip. It would allow the building of systems to model specific neural functions, such as the visual processing system. Interfacing with biological systems, allowing communication between neural prosthetic devices (e.g. artificial retinas) and the brain would also be possible. The technology would help neuroscientists learn more about how the brain works, and becoming a foundation for artificial intelligence devices. The chip would ultimately lead to a virtual translator and a tutor (I am not giving up on them yet!).