The purpose of writing this is to collate information on Digital Synchronous Counters. Particular emphasis was placed on the following areas :

1. Types of Synchronous Counters and How they work

According to the Oxford Encyclopædic Dictionary:

synchronous adj. existing or occurring at the same time.

counter n. an apparatus used for counting. || a person or thing that counts.

So a "synchronous counter" should mean "a person, thing or apparatus that counts at the same time" ?!?! Hmmm...

Let us take a look at the definition given by the IBM Dictionary of Computing instead.

synchronous (1) Pertaining to two or more processes that depend upon the occurrence of specific events such as common timing signals. (2) Occurring with a regular or predictable time relationship.

counter (1) A functional unit with a finite number of states each of which represents a number that can be, upon receipt of an appropriate signal, increased by unity or by a given constant. This device is usually capable of bringing the represented number to a specified value; for example zero.

So a "synchronous counter" is actually a functional unit with a certain number of states, each representing a number which can be increaced or decreased upon receiving an appropriate signal (e.g. a rising edge pulse), and is usually used to count to, or count down to zero from, a specified number N.

... and what it "really" means. OK! Enough of dictionary definitions.

Basically, any sequential circuit that goes through a prescribed sequence of states upon the application of input pulses is called a counter. The input pulses, called count pulses, may be clock pulses or they may originate from an external source and may occur at prescribed intervals of time or at random. The sequence of states in a counter may follow a binary count or any other sequence. 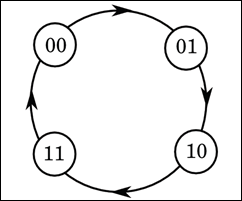