India's advanced communication satellite, GSAT-8, was successfully launched at 02:08 hrs IST today (May 21, 2011) by the Ariane-V launch vehicle of Arianespace from Kourou. French Guiana. Ariane V placed GSAT-8 into the intended Geosynchronous Transfer Orbit (GTO) of 35,861 km apogee and 258 km perigee, with an orbital inclination of 2.503 deg with respect to equator. 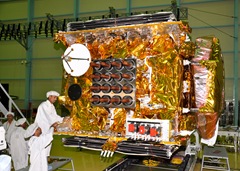 ISRO's Master Control Facility (MCF) at Hassan in Karnataka acquired the signals from GSAT-8 satellite immediately after the injection. Initial checks on the satellite have indicated normal health of the satellite. The satellite was captured in three-axis stabilization mode. Preparations are underway for the firing of 440 Newton Liquid Apogee Motor (LAM) during the third orbit of the satellite on May 22, 2011 at 03:58 hrs IST as a first step towards taking the satellite to its geostationary orbital home.

GSAT-8, India’s advanced communication satellite, is a high power communication satellite being inducted in the INSAT system. Weighing about 3100 Kg at lift-off, GSAT-8 is configured to carry 24 high power transponders in Ku-band and a two-channel GPS Aided Geo Augmented Navigation (GAGAN) payload operating in L1 and L5 bands.
The 24 Ku band transponders will augment the capacity in the INSAT system. The GAGAN payload provides the Satellite Based Augmentation System (SBAS), through which the accuracy of the positioning information obtained from the GPS Satellite is improved by a network of ground based receivers and made available to the users in the country through the geostationary satellites.