Transient Materials - Electronics that melt away 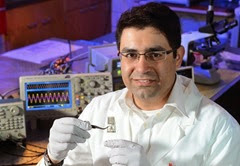 Imagine tossing your old phone in the toilet, watching it dissolve and then flushing it down, instead of having it wind up in a landfill. Scientists are working on electronic devices that can be triggered to disappear when they are no longer needed.

The technology is years away, but Assistant Professor Reza Montazami and his research team in the mechanical engineering labs at Iowa State University have published a report that shows progress is being made. In the two years they've been working on the project, they have created a fully dissolvable and working antenna.

"You can actually send a signal to your passport via satellite that causes the passport to physically degrade, so no one can use it," Montazami said.

The electronics, made with special "transient materials," could have far-ranging possibilities. Dissolvable electronics could be used in medicine for localizing treatment and delivering vaccines inside the body. They also could eliminate extra surgeries to remove temporarily implanted devices.The military could design information-gathering gadgets that could complete their mission and dissolve without leaving a trace.

The researchers have developed and tested transient resistors and capacitors. They’re working on transient LED and transistor technology, said Montazami, who started the research as a way to connect his background in solid-state physics and materials science with applied work in mechanical engineering.

As the technology develops, Montazami sees more and more potential for the commercial application of transient materials.