How 450mm wafers will change the semiconductor industry 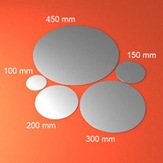 The semiconductor industry's transition to making chips on 450-millimeter wafers is better described as a "transformation," Jonathan Davis of Semiconductor Equipment and Materials International writes. "The shift to 450mm will take a several years to manifest and numerous complexities are being skillfully managed by multiple organizations and consortia," he writes, adding, "However, once the changeover occurs, in hindsight, most in the industry will recognize that they participated in something transformational."

Even for the segments that continue manufacturing semiconductor devices on 300mm and 200mm silicon wafers, the industry will change dramatically with the introduction of 450mm wafer processing. The 450mm era will impact industry composition, supply chain dynamics, capital spending concentration, future R&D capabilities and many other facets of today’s semiconductor manufacturing industry — not the least of which are the fabs, wafers and tools with which chips are made.

The shift to 450mm will take a several years to manifest and numerous complexities are being skillfully managed by multiple organizations and consortia.   For those reasons, the evolutionary tone of “transition” seems appropriate. However, once the changeover occurs, in hindsight, most in the industry will recognize that they participated in something transformational.

No transformation occurs in isolation and other factors will contribute to the revolutionary qualities of 450mm.  Market factors, new facilities design, next generation processing technology, the changing dynamics of node development and new materials integration will simultaneously affect the industry landscape.

While reading about the implications of 450mm is valuable, I believe that there is much to learn by being a part of the discussion. How is this future transformation being envisioned and acted on today?  I hope that you will join us — at our “live” event, where you will have the opportunity to hear first-hand information… direct from well-informed experts in the industry.

Potential revisions in the 450mm wafer specification are under consideration.  At least two issues are currently being evaluated by the industry and both portend significant ramifications for wafer suppliers, equipment makers and those technologies that interface with the wafer.

First, the wafer orientation method may be revised to eliminate the orientation “notch” on the perimeter of the substrate. The notch was introduced in the 300mm transition as an alternative to the flat.  However, both equipment suppliers and IC makers, through a constructive and collaborative dialog, have concluded that eliminating the notch can potentially improve the die yield, tool performance and cost.

Secondly, reduction of the wafer edge exclusion area — that peripheral portion of the silicon on which no viable device structure occurs — also offers potential yield advantages.  The current 450mm wafer specification (SEMI E76-0710), originally published in 2010, calls for a 2mm edge exclusion zone.  IC makers believe that reduction of this area to a 1.5mm dimension offers the cost equivalence of a 1 percent yield increase.  Though a percent may sound trivial, it is represents substantial increased value over time.

Along with cost and efficiency improvements, IC makers and consortia driving the transition to 450mm manufacturing expect to achieve similar or better environmental performance. Larger footprints and resource demands from 450mm facilities in conjunction with mandates for environmentally aware operations are compelling fabs and suppliers to consider sustainability and systems integration at greater levels than ever before.

Experts in fab facilities, energy, water and equipment engineering will discuss the implications of 450mm to environment, health and safety during the SEMICON West 450mm Manufacturing EHS Forum on Wednesday, July 10.

Included in the presentations are perspectives from the Facility 450 Consortium (F450C) including Ovivo, Edwards and M+W Group.  A holistic Site Resource Model that provides semiconductor manufacturers visibility into effective reduction of total energy and water demands for individual systems, as well as for the entire facility will be reviewed by CH2M Hill. The model is an integrated analytical approach to assess and optimize a semiconductor facility’s thermal energy, electrical energy, and water demand, as well as the cost associated with these resources.