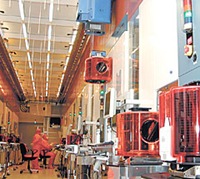 The government of India is offering up to $2.75 billion in incentives for the construction and equipping of the country's first wafer fabrication facility. India imported $8.2 billion in semiconductors last year, according to Gartner. Getting its own wafer fab is said to present a number of challenges to India, especially in the necessary infrastructure and an ecosystem of suppliers.

The domestic purchasing mandate, known as the “preferential market access” policy, seeks to address a real problem: imports of electronics are growing so fast that by 2020, they are projected to eclipse oil as the developing country’s largest import expense.

India’s import bill for semiconductors alone was $8.2 billion in 2012, according to Gartner, a research firm. And demand is growing at around 20 percent a year, according to the Department of Electronics and Information Technology.

For all electronics, India’s foreign currency bill is projected to grow from around $70 billion in 2012 to $300 billion by 2020, according to a government task force.