IT engineers have developed a semi-autonomous vehicle safety system that takes over if the driver does something stupid. 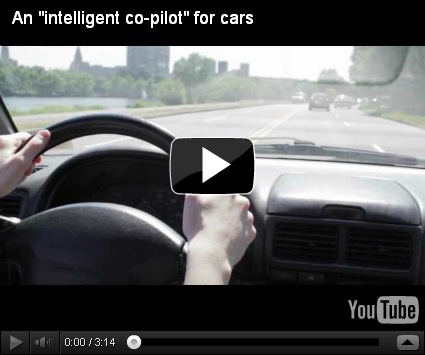 The system uses an onboard camera and laser rangefinder to identify hazards. An algorithm analyzes the data and identifies safe zones — avoiding, for example, barrels in a field, or other cars on a roadway.
The driver's in charge - until the system recognizes that the vehicle's about to exit a safe zone and takes over.

"The real innovation is enabling the car to share [control] with you," says PhD student Sterling Anderson. "If you want to drive, it’ll just make sure you don’t hit anything."

The team's approach is based on identifying safe zones, or 'homotopies', rather than specific paths of travel. Instead of mapping out individual paths along a roadway, the researchers divide a vehicle’s environment into triangles, with certain 'constrained' triangle edges representing an obstacle or a lane’s boundary.

If a driver looks like crossing a constrained edge — for instance, if he’s fallen asleep at the wheel and is about to run into a barrier  — the system takes over, steering the car back into the safe zone.

The system works well in tests, say its designers: in more than 1,200 trials of the system, with , there have only been a few collisions, mostly when glitches in the vehicle’s camera failed to identify an obstacle.

One possible problem with the system, though, is that it could give drivers a false sense of confidence on their own abilities.

Using it, says Anderson, "You’d say, ‘Hey, I pulled this off,’ and you wouldn’t know that the car is changing things behind the scenes to make sure the vehicle remains safe, even if your inputs are not."

He and Iagnemma are now exploring ways to tailor the system to various levels of driving experience.

They're also hoping to pare down the system to identify obstacles using a single cellphone.

"You could stick your cellphone on the dashboard, and it would use the camera, accelerometers and gyro to provide the feedback needed by the system," says Anderson.

"I think we'll find better ways of doing it that will be simpler, cheaper and allow more users access to the technology."