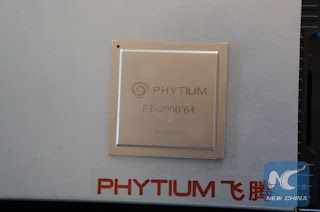 While the world awaits the AMD K12 and Qualcomm Hydra ARM server chips to join the ranks of the Applied Micro X-Gene and Cavium ThunderX processors already in the market, it could be upstart Chinese chip maker Phytium Technology that gets a brawny chip into the field first and also gets traction among actual datacenter server customers, not just tire kickers.

Phytium Technology has announced a 64-core ARM server CPU, which according to the press release will deliver 512 gigaflops of performance. The new chip, known as FT-2000/64, is aimed at “high throughput and high performance servers.”

Phytium is a chip design enterprise, based in Tianjin, China. In March 2015, the company released its first products: the FT-1500A/4 and FT-1500A/16, 4-core and 16-core implementations, respectively of the ARMv8 design.

Phytium was on hand at last week’s Hot Chips 28 conference, showing off its chippery and laptop, desktop and server machines employing its “Earth” and “Mars” FT series of ARM chips. Most of the interest that people showed in the server variants, which are both based on variants of the “Xiaomi” core design that the company has cooked up based on ARMv8 intellectual property licensed from ARM Holdings. There is chatter that one of the three Chinese exascale machines, which we wrote about here, will employ a future Phytium processor, but we were unable to confirm this with the Phytium executives at the event. What we can tell you is that the first engineering samples of the two Earth ARM chips, the FT-1500A/4 and the FT-1500A/16, as well as the one Mars ARM chip, the FT-2000/64, are back from Taiwan Semiconductor Manufacturing Corp and that we saw systems running the Kylin Linux operating system (a variant of Canonical’s Ubuntu) at the Hot Chips event.

Here are the key chip features from the FT-2000/64 product page:

No pricing was provided on the new chips, and it’s unclear from the press release if the product is available today. The next time we hear about the FT-2000/64 might very well be when it shows up in a TOP500 supercomputer. Stay tuned.
at September 11, 2016