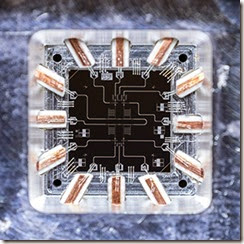 Google was one of the early backers of a new approach to quantum computing adopted by a company called D-Wave. The company offers boxes that perform a process called quantum annealing instead of the more typical approach, which involves encoding information in a quantum state of a collection of entangled qubits. Although whatever D-Wave is doing is clearly quantum, it's still not clear that it offers a speedup compared to classical computers.

So rather than keeping all its eggs in D-Wave's basket, Google's "Quantum A.I. Lab" announced that it is starting a collaboration with an academic quantum computing researcher, John Martinis of the University of California-Santa Barbara. Martinis' group focuses on creating fault-tolerant qubits using a solid-state superconducting structure called a Josephson junction. By linking several of these junctions and spreading a single quantum state across them, it's possible to reach fidelities of over 99 percent when it comes to storing the quantum state.

Quantum states tend to be fragile and decay when they interact with their environment, so a lot of labs are working on making qubits that are more robust or have error correcting ability. Josephson junctions are one possible approach to this, but they have the advantage of being on familiar turf for computing companies, since they can be made by standard fabrication techniques (although they still need to be chilled to near absolute zero).

Google made it clear that it's not turning its back on D-Wave; the new work will be done in parallel. As for quantum computing itself, this is interesting news. A quick look at our past coverage makes it clear that there are a number of technologies that appear to be getting close to the point where they could be used to create a multi-qubit machine. Google's decision to push hard on one of these approaches could narrow the field—either by getting Josephson junctions to work or by showing that there are severe limitations to them.