If you're impressed with how much data can be stored on your portable hard drive, well ... that's nothing. Scientists have now created a functioning magnetic data storage unit that measures just 4 by 16 nanometers, uses 12 atoms per bit, and can store an entire byte (8 bits) on as little as 96 atoms - by contrast, a regular hard drive requires half a billion atoms for each byte. It was created by a team of scientists from IBM and the German Center for Free-Electron Laser Science (CFEL), which is a joint venture of the Deutsches Elektronen-Synchrotron DESY research center in Hamburg, the Max-Planck-Society and the University of Hamburg.

The storage unit was created one atom at a time, using a scanning tunneling microscope located at IBM's Almaden Research Center in San Jose, California. Iron atoms were arranged in rows of six, these rows then grouped into pairs, each pair capable of storing one bit of information - a byte would require eight pairs of rows.

Each pair can be set to one of two possible magnetic configurations, which serve as the equivalent of a 1 or 0. Using the tip of the microscope, the scientists were able to flip between those two configurations on each pair, by administering an electric pulse. They were subsequently able to "read" the configuration of each pair, by applying a weaker pulse using the same microscope.

While conventional hard drives utilize a type of magnetism known as ferromagnetism, the atom-scale device uses its opposite, antiferromagnetism. In antiferromagnetic material, the spins of neighboring atoms are oppositely aligned, which keeps them from magnetically interfering with one another. The upshot is that the paired rows of atoms were able to be packed just one nanometer apart from one another, which wouldn't otherwise have been possible.

Before you start expecting to find antiferromagnetic rows of atoms in your smartphone, however, a little work still needs to be done. Presently, the material must be kept at a temperature of 5 Kelvin, or -268ºC (-450ºF). The IBM/CFEL researchers are confident, however, that subsequent arrays of 200 atoms could be stable at room temperature.

It was found that 12 atoms was the minimum number that could be used for storing each bit, before quantum effects set in and distorted the information. "We have learned to control quantum effects through form and size of the iron atom rows," said CFEL's Sebastian Loth. "We can now use this ability to investigate how quantum mechanics kicks in. What separates quantum magnets from classical magnets? How does a magnet behave at the frontier between both worlds? These are exciting questions that soon could be answered." 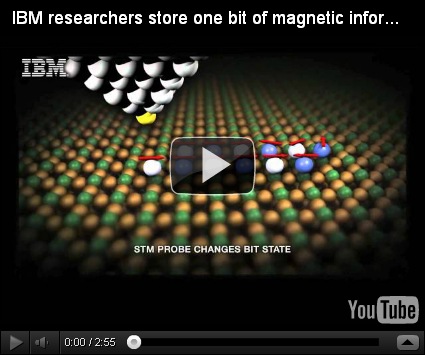 IBM Research - Almaden physicist Andreas Heinrich explains the industry-wide need to examine the future of storage at the atomic scale and how he and his teammates started with 1 atom and a scanning tunneling microscope and eventually succeeded in storing one bit of magnetic information reliably in 12 atoms.